In celebration of Hispanic Heritage Month, Ally will give one of the most anticipated performances of the night and pay tribute to musical legend Santana.

As part of an all-star line-up, which includes the Black Pumas, Alex Cuba, Juanes and The Mavericks, Ally Brooke will mesmerize audiences with a special performance on tonight’s broadcast in tribute to Rock and Roll Hall of Famer and “Legend” award recipient, Santana. During the awards show Ally will perform one of Santana’s biggest hits and honoring his legacy.

This year, Ally Brooke set in motion a new journey that will propel her career to the next level and expand her brand and music into new markets. She announced her newly minted partnership with Duars Entertainment (management) and AMSI Entertainment (label). As the first female recording artist signed by the label, the partnership seeks to position her as one of the biggest global female artists in the world. Currently, Ally is working on multiple Spanish releases for which she’s tapped some of Latin music’s A-list producers, including Luny Tunes, Dimelo Flow and Mr. NaisGai.

Having accumulated over a billion streams across her catalog, the multi-platinum singer-songwriter, Ally Brooke, started her solo career in 2019, with back-to-back Top 40 charting singles and an impressive resume of genre-bending collaborations including “All Night” alongside Afrojack which marked her first #1 as a solo artist on US Dance Radio. Additionally, Ally Brooke participated on ABC’s “Dancing with the stars” and embarked on a tour in 2020 that took her to multiple U.S. cities, including a sold-out show at New York’s Gramercy Theater. Last year, Ally Brooke released her book «Finding Your Harmony» and currently voices one of the characters of Nickelodeon’s cartoon series «The Casagrandes.» 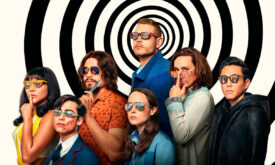