‘Walking Dead’ star Morgan and wife and ‘One Tree Hill’ veteran Hilarie Burton Morgan will co-host the talk show, designed to embrace «our interconnectedness from home.»

The Walking Dead villain turned antihero Negan won’t be swinging his barbed-wired baseball bat at zombies any time soon, but the man behind Lucille will be back in front of viewers in no time at all.

AMC has announced the launch of Friday Night In With the Morgans, a new weekly half-hour video-chat-based series hosted by Jeffrey Dean Morgan of Walking Dead fame and his wife and fellow actor, Hilarie Burton Morgan (One Tree Hill). Shot on their farm in upstate New York, Friday Night In With the Morgans will premiere April 17 and feature guests from The Walking Dead world such as Christian Serratos (Rosita) and Sarah Wayne Callies (Lori Grimes), plus others: The League husband-and-wife team Mark Duplass and Katie Aselton, Supernatural star Jenson Ackles and wife and fellow actor Danneel Ackles (One Tree Hill), as well as family friend and physician Dr. Sharagim Kemp.

Described as boasting a «free-flowing, raw feel featuring unfiltered conversation about how we’re all getting through this unprecedented moment,» AMC Networks’ Entertainment Group and AMC Studios president Sarah Barnett says Friday Night In With the Morgans will serve as «an antidote to the overly rehearsed, overly manicured glimpse into somebody’s perfect life.»

«It will be full of heart, messy conversation, hardworking humans who are on the front lines, and guests who might reveal some previously unknown talents,» says Barnett. «Ultimately, it’s a shot at some raw and real entertainment that will uplift and connect with our audiences.»

«We have been a part of the AMC family for a long time and are honored to create this comforting space with them,» Morgan and Burton add in a statement. «From our home here at Mischief Farm, we look forward to shining a light on those who are doing good in the world, catching up with old friends and connecting with the awesome fan base we’ve gotten to know over the years.»

Friday Night In With the Morgans arrives as production across the film and television industry remains at a virtual standstill amid the global pandemic. Without a content pipeline, networks have been getting creative in crafting from-home episodes and specials. Late night shows are featuring hosts in their homes, and celebrities are coming forth with new ventures of their own, such as John Krasinski’s «Some Good News,» hosted on YouTube.

Morgan is one of the central stars on AMC’s flagship zombie series The Walking Dead, currently in its 10th season; there is currently no word on when viewers will see the season 10 finale, which was originally scheduled to air April 12, but has since pushed back due to a need for extended postproduction. Walking Dead was in preproduction for season 11 ahead of an anticipated May production start as lockdown orders and recommendations brought Hollywood to a halt. As it stands, production on season 11 has been pushed by three weeks. Typically, production on The Walking Dead takes place from May through November. The writers room remains in operation.

Friday Night In With The Morgans is executive produced by Michael Davies, Tammy Johnston, Brandon Monk and Steve Markowitz for Embassy Row, along with Jeffrey Dean Morgan and Hilarie Burton Morgan. 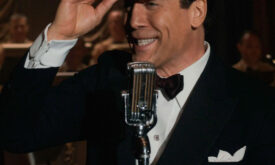 Dance Like Desi Arnaz: Javier Bardem Talks Becoming a Musician in ‘Being the Ricardos’