In each short video, Carlos Vives will guide us through the world of “Cumbiana” where he explains the origin and inspiration of the album. The first clip is called “Cumbiana: música del cielo, del agua y de la tierra” (Cumbiana: music from the sky, water and land), the second is “Descubre el mundo perdido de Cumbiana” (Discover Cumbiana’s lost world), while the third is titled “Es tiempo de romper los complejos, bienvenidos a Cumbiana” (It’s time to break the complexes, welcome to Cumbiana). The short clips, filmed at the artist Gaira Música Local studios in Bogotá, Colombia and directed by Mestiza Films, will be only available in Latin America.

Through these videos, Vives talks to the fans who are listening to him while playing his Spotify This is Carlos Vives playlist. It’s important to note that this playlist has over 225K followers.

“For Sale”, his second single from the album with Alejandro Sanz, has already surpassed 20 million views and the track charted #1 on the radio for three consecutive weeks in Guatemala, Paraguay and Honduras. 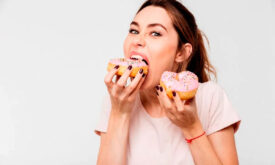