Natti Natasha gives a heartwarming and never-seen before performance of “Princesa,” a song dedicated to her unborn daughter

This past Sunday, and just a few days away from becoming a first-time mother, Natti Natasha premiered her first-ever livestream in celebration of Mother’s Day. The virtual concert was streamed live exclusively on her official Facebook page. Due to popular demand, fans will be able to relive the show in honor of all the mothers around the world for a second time on the artist’s official page exclusively on Facebook Watch.

Natti Natasha took fans through a musical journey spread out through the four seasons of the year: Spring, Summer, Autumn and Winter, where each season had its own theme, costumes, beautiful landscapes and songs representing each. Aside from singing her greatest hits, including «La Mejor Versión de mí», «Antes que salga el sol”, «Dutty Love», “Sin Pijama” and “Ram Pam Pam”, during the Fall set Natti surprised fans with a never-seen before emotional and powerful performance of “Princesa”, a new song dedicated to her unborn daughter.

WHO?  Since her early beginnings, Dominican born Natti Natasha has paved the way for women seeking to make their mark in Latin music. Breaking records for two consecutive years as the most viewed female artist on YouTube (overall), Natti has over 50 million loyal fans across her social media platforms, with 40 million on Facebook and Instagram. She kicked off 2021 with another No. 1 (Billboard Latin Airplay and Latin Pop Airplay) with «Antes Que Salga El Sol”. In celebration of Women’s History Month, Natti released “Las Nenas” with Cazzu, Farina and La Duraca, a song declaring that the unity among women in the genre was far from over, and which has become a viral phenomenon with over 1.4 million videos on Tik Tok. In April, she celebrated the third anniversary of her record-breaking collaboration with Becky G («Sin Pajama») with the release of their second collaboration, «Ram Pam Pam», which has taken social media by storm. 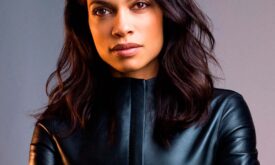 How Rosario Dawson Can Move ‘The Mandalorian’ Forward