Proclaimed “Prince of Perreo”, KEVVO showcases his versatility and undeniable musical talent with the release of the new track “No Lo Niegues” (“Don’t Deny It”), alongside artist on the rise Jay Wheeler.

The new single, released under Interscope Records in partnership with Una Visión Quintana, Inc., grants KEVVO the opportunity to offer something new and fresh to fans who are used to playing his monster “perreo” tracks to kickstart a party. “No Lo Niegues” is now available on all digital music platforms.

As the first single from his highly anticipated album Cotidiano, KEVVO explains «the single was born when I was listening to the album and noticed I was missing a track, a ‘love letter’ dedicated to my female fans», explains KEVVO. “Most of my fans have only listened to my perreos but they’ve never heard me sing something specific to women. In this song, I am telling a girl to leave her toxic relationship which is making her unhappy…and to take a chance with a vibrant, young man whom she can fall in love with and find true happiness. I wanted to show the my flirty side because fans really don’t know that side of me yet, and as an artist you have to be willing and able to take a chance and offer something different.»

KEVVO will definitely continue to give the world something to talk about. In 2019, he achieved unwarranted success with the release of the global monster hit “105F RMX” with Farruko, Myke Towers, Arcangel, Ñengo Flow, Chencho Corleone and Darell, which surpassed 243 million views on YouTube and 97 million views on Spotify. In early 2020, due to the current global pandemic, Kevvo launched his original IGTV series, #CuarentenaTV, where he hosted virtual club nights via his official Instagram page with the purpose of continuing to connect and engage his fans.

The new single shows that KEVVO‘s music goes beyond ‘perreo’, and that he can steal the hearts of his female followers with romantic melodies and lyrics. The video was produced by Rodrigo Films and filmed in Miami, FL.

Cotidiano, KEVVO‘s debut album, is set to disrupt the game with a formula of “old-school” reggaeton magic combined with collaborations from today’s biggest artists, which will certainly set any dance floor on fire. 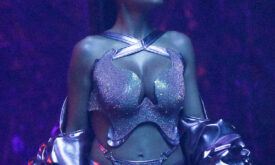