Kelly Centeno premieres a new album of her own writing “Favorite Flowers”.

With her album entitled “Favorite Flowers”, the young singer-songwriter Kelly Centeno begins this new cycle in her musical career in which many musical surprises are expected. Very excited by her release, the artist revealed the meaning of this new album for her life.

This album is born from her greatest inspiration in music and its title has to do with one of the songs dedicated to the memory of his beloved grandmother, on which a beautiful song was born that is also the title of this album «Favorite Flowers«.

The artist brings us 10 new songs that she wrote with luxurious musical arrangements: “when did we grow up?”, “distant butterflies”, “scattered butterflies”, “simon said”, “72”, “last forever», “scene-shifter”, “favorite flowers”, “can you see (the silhouette)”, “the last flicker”, “my jess”. All of them under the musical production of Libni, President/CEO Another Level Studios.

Kelly Centeno is only 15 years old, she was born on January 4, 2007 in the city of Miami, United States. From a very young age she was inclined towards music and a little later at the age of 12 she has cultivated the magical talent of composition, since then she has composed more than 150 songs to date.

Kelly tells us that she dreams of singing with her idols in the music industry like Ashe, Taylor Swift and Louis Tomlinson. She would love to sing with any of them, as well as any other member of One Direction. Since her childhood, she listened to «What Makes You Beautiful» and «Our Song», which were musical themes that inspired her as a singer.

“Favorite Flowers”, the first album by the artist Kelly Centeno, imposes success after its release. We invite all her fans and followers on social media to download her new music available on Spotify and Apple Music digital music platforms, etc. We hope that these 10 new songs are to everyone’s liking. 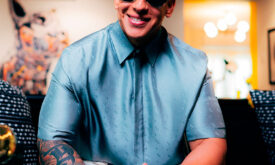