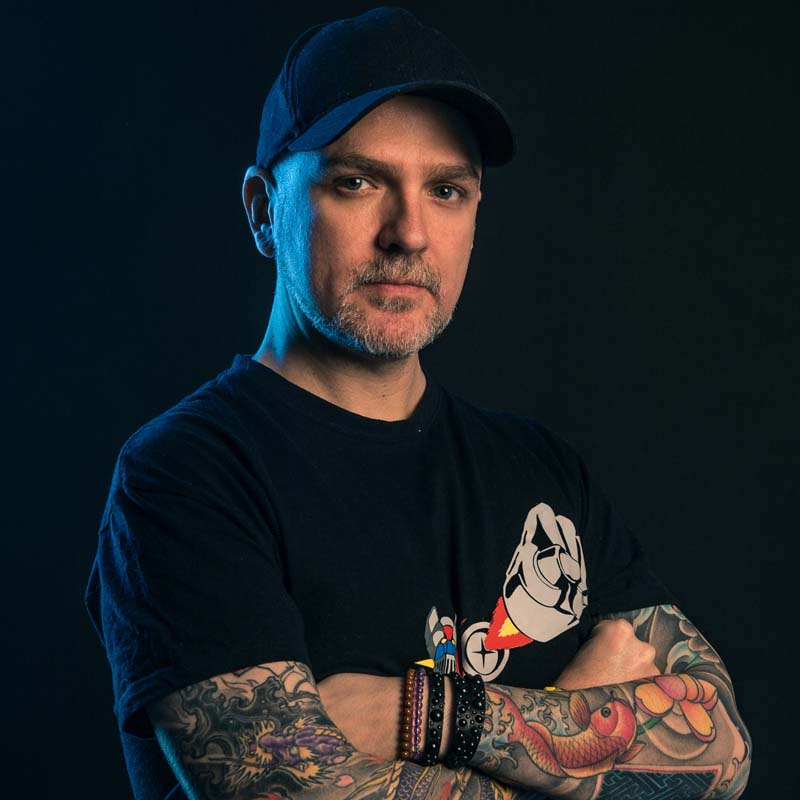 Estanis Figueroa is an international, chameleonic and creative music guru from Spain.

The entertainment accomplishments that this music business executive has achieved, are truly remarkable.

Estanis Figueroa (and many of his alter egos aka Larry Capolla, Satanis, Dani Otero, est4nis) show that a fearless and ingenious mind … never gets bored!

Estanis Figueroa recorded his first EP (as a drummer) at age 17 for the band ASH, that was not signed to PDI Records only because the band was too young and neither member had done the (at the time) mandatory military service in Spain. Besides being the drummer for the band, he also acted as their manager and his work was able to land the young act in reputed magazines like Heavy Rock or RIP and perform in local High Schools (1990 /1991)

He studied «Recording Engineering and Album Production» in Los Angeles (1992 / 1993) and worked as an assistant 2nd engineer for Red Zone Studios in Burbank, where Earth Wind & Fire, Kenny G and L.A Guns were regular recording Artists. (1993)

Studied «Music Business Certificate Program» at UCLA and by 1995 was already being mentioned and credited in albums by awarded Artists like Los Fabulosos Cadillacs, Babsónicos or 2 Minutos. He worked for a top Latin Artist agency and grabbed experience as an Artist Manager, Record executive producer and concert promoter.

With his fast learning and «go-get’em» attitude, by 1996 he was organizing his own tours and shows from Latin bands like Los Auténticos Decadentes, Todos Tus Muertos at Hollywood legendary clubs like the Troubadour in West Hollywood. 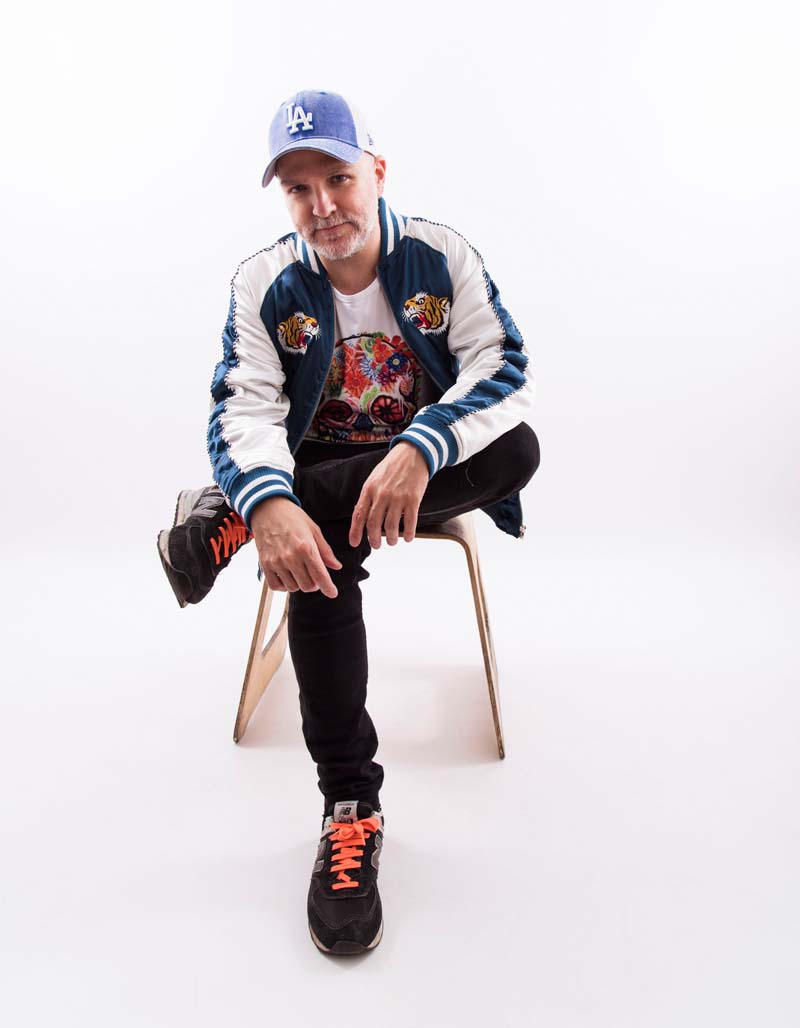 Since 1998 and for a couple of years, he was managing, signing and promoting the Mexican Artist TITAN. Under his belt and direction and at age 24, Estanis Figueroa was touring the world as opening act for multi-platinum artist Moby, licensing their songs to commercials in Japan, including their tracks in Oscar nominated movies like «Amores Perros» (Iñarritu) and getting six figure contracts with Warner Chappell while taking the European Festival circuit by storm as the first ever Latin electronic band to reach such goals.

After the world was shaken in Sept 11th, 2001 (not precisely by his 28th birthday on that day) Estanis Figueroa decided to re-invent himself due to the obligated immobilized career that his band TITAN had suffered from the closing of their USA label, Virgin Records America. It was then when he decided to fly to the island of Ibiza, dance club capital of the world.

His knowledge acquired through this last years as an electronic music artist manager, landed him a job as a Label manager for the iconic brand PACHA. During this «3-year long weekend» as he refers to it, he was able to produce 8 albums and 2 DVD’s with the world’s best DJ’s and house labels. Also, he organized launch parties in cities like Manila, Zurich or London.

During his stay at the island he also wanted to go back to his origins of Latin electronic music, and started an FM Radio show called Electronic Latin Freaks (elf) although for marketing reasons was later changed to Electronic Latin Beats (elb) This was done under one of his alter ego’s Larry Capolla. This Radio show lasted 8 years, was broadcasted at 3 different radio stations in Spain and the US. Out of this pioneering crusade for Latin electronic music, Estanis Figueroa was also able to produce another album under the same name (elf) through Spain’s top leading indie label, Subterfuge Records by 2004.

When he got tired of the island’s hedonism and saturated clubbing culture, Estanis Figueroa fled back to Barcelona where he kept producing radio shows, booking artists like The Pinker Tones and doing interviews for publications like The Herald Tribune (New York), El Pais (Madrid) or TRAX Magazine (Barcelona).

It was here where he jumped to a wonderful opportunity and created, co-wrote and hosted a TV Program named «Sonidos De Ciudad» for Discovery Channel (Pilot submitted on 2008). This process gave him a very close insight of what it was like to work for TV and definitely made a great impression on him as he was called to co-write in Spain another TV show named «Rock The Kitchen» but unfortunately was never released.

During his 3 year stay in Los Angeles Estanis Figueroa was also able to compose, record and produce another album for his own band, this time called LA HOSTIA. The album was recorded at the Studios of Latin Grammy winner Randy Ebright from the multi-platinum selling band Molotov. He played a few shows in California and released the album under another one of his alter egos Dani Otero.

Recession in California in 2009 … so back to Spain it was. Estanis Figueroa landed in Madrid and started the Madrid office of Live Nation Spain (the world’s biggest concert promoter agency) as the right-hand man of the President, Robert Grima. Within the first year back in Spain, Estanis Figueroa was already a recognized and well respected name in the Spanish capital music business circuit. Not only he was working with/for the Spanish tours of artists like U2, Madonna, Coldplay, Lady Gaga, Rhianna, etc. but he also created a National artist department and his first signing was The Zombie Kids. At that time, the artist was performing at small clubs and had no original music released. By the time Estanis ended his management with them (2012) he had booked the band in every possible European festival, signed them to a major label (Universal Music), placed their music in films and commercials in Mexico and Spain, and overall make them the hottest artist in the country winning an MTV European Music Award.

By 2014 Estanis felt like it was time to grow in a different direction and left the company to work as a Freelance Entertainment sniper (aka est4nis), as he likes to define himself nowadays. In the last 5 years, the accomplishments for him have grown even more dramatically. Estanis has since then, booked several important music festivals, negotiated the likes of John Fogerty, Iggy Pop or Chris Issack. He has curated international artists like Jorja Smith, Franz Ferdinand or Simple Minds for a primetime National TV Show in Spain (La Hora Musa) and worked on the broadcast of legendary artists like The Smashing Pumpkins, Queens of The StOne Age or The Cure for Spanish biggest cultural national TV channel «La2».

Besides working for these couple of TV projects, Estanis Figueroa is also a prolific music video producer, and to this date he has over 40 music videos produced for labels like Sony, Universal and Warner and their international artists like Becky G, Abraham Mateo and Mala Rodriguez.

What to expect in 2020 for this music wizard ? … something big, that’s for sure! 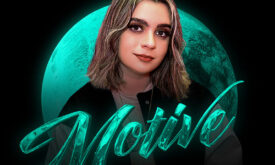 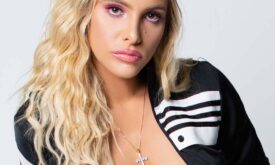 Ivorian Doll Is the Rising Queen of Drill