Continuing its popular social media awards format, The American Society of Composers, Authors and Publishers (ASCAP) today announces the winners of the most performed songs of the past year in Latin music. For the third time in his career, hitmaker Daddy Yankee is named ASCAP Songwriter of the Year, adding to his record-setting collection for a total of 42 ASCAP Latin Music Awards. He also captured Songwriter-Artist of the Year in 2019 and 2017.

A global music icon, Daddy Yankee is known as the “King of Reggaeton” by music critics and fans alike. He has sold approximately 30 million records since his 2004 international hit single “Gasolina” made the genre a global phenomenon. In 2017, in collaboration with Latin pop singer Luis Fonsi, Yankee released the mega hit “Despacito” which became the first Spanish-language song to hit #1 on the Billboard Hot 100 since 1996, the top-selling single of the decade 2010–2019 and the most-watched video on YouTube. Daddy Yankee has been named one of the Most Influential Hispanics by TIME and CNN.

ASCAP Chairman of the Board and President Paul Williams introduced the roll out of the winners, saying, “We are so thrilled to honor your amazing achievements of the past year at our El Premio ASCAP – our annual Latin Music Awards. Once again we will come together in spirit and solidarity. Starting today, we welcome your fans from all over the world to join in and celebrate your success. On behalf of your ASCAP family, I want to say congratulations to all of this year’s winners for your incredible musical achievements. Felicitaciones!”

Hosted by Colombian singer, rapper and songwriter Farina, the ASCAP Latin Music Awards are presented today through March 25 in both Spanish and English via @ASCAPLatino and @ASCAP on Instagram, Twitter and Facebook with the hashtags  #ElPremioASCAP and #ASCAPAwards. Fans, friends and peers can tune in starting at 10:00 AM ET today to see the premiere of exclusive winner acceptance speeches, unboxing videos, home studio tours, photos and more from the genre’s hottest songwriters and top publishers. 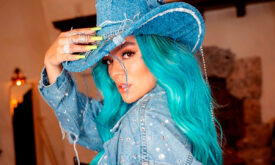