Connecting cultures and marking a new era in Latin music as today’s leading Spanish rapper, Ptazeta releases her new single and video “Desacatá” alongside one of the top trap/cumbia singers in Argentina, L-gante. Released under Interscope Records, the track is now available on all digital platforms.

Produced by DJ Juacko and Eydren, Ptazeta shows off her rebellious side and showcases her incomparable lyrical flow. “Desacatá”, which comes from the Dominican expression that refers to a woman who does what she wants when she wants, is a trap, cumbia and Dominican dembow-infused that’s certain to captivate listeners around the world, and fire dance floors at at underground and house parties across, Europe, U.S., Latin America and the Caribbean.

«She wants to perrear, tonight she’s disobeying, you can’t compare that no one tells her nah…», highlights the chorus of the song where the multi-platinum artist and the influential Argentine trap singer and creator of “Cumbia 420”, L-Gante, merged their styles and cultures to achieve this unique proposal that will captivate listeners.

Directed by Fede Cabred, the official video for «Desacatá» is set at a house party, where madness and “descato” are at the forefront, until the house party receives a surprise visit from the police. The video highlights performances from both artists, who are clearly the life of the party. Check out the music video on Ptazeta’s YouTube channel!

At the same time, she has her sights set on a cultural takeover in 2022, and she’s got the talent to lead one. Right now, Ptazeta is putting the finishing touches on more music to be released very soon. 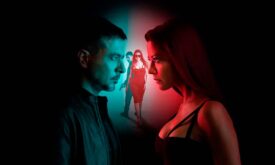