Urban artist, Pacho El Antifeka, continues to demonstrate his capabilities within the music industry, especially with his most recent release. With a soft and melancholic rhythm, Pacho joins Nicky Jam to release their new single “Triste.” Released under Duars Entertainment, the single is now available on all digital music platforms with the music video available on Pacho El Antifeka’s official YouTube channel.

Produced by Yomo Pauta, Jetty and Came, “Triste” allows both artists to show another side of themselves using their powerful voices to share their perspectives on heartbreak. “I like “Triste» so much because it is a song where I have been able to test my voice and tell the story of falling out of love with your partner, which is something that occurs more often than what we can imagine. Later, we are able to find another person that we connect with in a unique manner, however, we find ourselves guilty for causing our partners to suffer.” expressed Pacho El Antifeka. «Collaborating with Nicky Jam for me was a dream come true because he’s a Reggaeton icon. The vibe I felt while working with Nicky was something else, he always brings a lot of joy when he’s around,» concluded Pacho, looking forward for this collaboration to become the next Latin music hit.

The music video was directed by Gus Camacho in Miami, Florida and is available on Pacho El Antifeka’s official YouTube Channel. The cold concept used throughout the video is a metaphor for what happens in a relationship when it’s coming to an end, or when it’s no longer what it used to be. The relationship gets cold, and by using this concept the audience can fully immerse themselves in the story the single portrays.

Pacho El Antifeka is certain that his fans will embrace and enjoy all the surprises that this new musical phase will bring. Even though Pacho will never leave his musical essence behind, he seeks to take his music to a wider audience and reach places he’s never been to before. His previous singles «No Te Veo Remix» (Wisin y Yandel, Jay Wheeler) and “Qué Será?” (Nio García, Casper Mágico) has garnered 15 million combined streams. The artist is preparing to release his upcoming album «All-Star Game», which will feature A-list collaborations from some of the hottest talent in the Latin urban scene today, including Anuel AA, Arcangel, Lunay, Rauw Alejandro and Wisin y Yandel, among others. 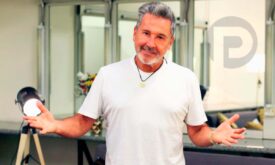